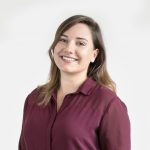 Magdalena has worked as a UX and Service Designers for five years in Poland and France. She joined WeDigitalGarden in 2017, and has worked on projects for AXA, Kering, Sodexo, as well as for French ski resorts: Val d’Isère and Ménuires. For 3 years, Magdalena was an organizer and a member of a program committee for the MCE Conf, the largest Central European technology conference. Currently, she is still involved in the community as a speaker. This year, she was invited to share her experience at the UX Healthcare conference in London.